The other day there was a ‘tap tap tap’ at my door.

When I opened it a very nice man asked me if I was worried about people protesting around the world. I felt sure he was a Jehovah’s witness as they are always very nice. Not knowing what to say but not wanting to get involved in a discussion I said “It doesn’t really affect me”. He went on to say that people around the world are unhappy etc.. He offered me a pamphlet which looked interesting and left. 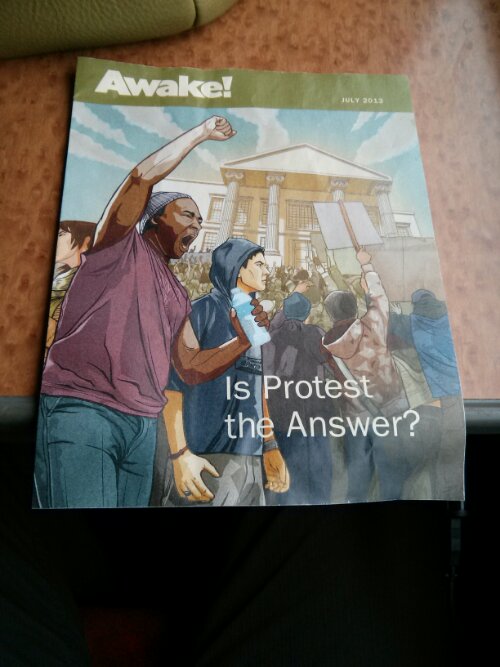 There it is and it doesn’t immediately appear to be religious propaganda. Inside the font page though I can see that yes it is indeed by JW and the nice man did indeed want to convert me to his particular belief system. The last such encounter left me with a similar pamphlet called ‘The watchtower’ filled with bible quotes but this looks more interesting.

Page 3 has some news bites from around the world. Then there comes a feature with advice on parenting with some rather incongruous bible quotes but still interesting.

Next is the headline article ‘Is Protest the Answer?’. This explains how a man setting himself on fire has ignited more than his flesh. It has ignited protests across the world. It says that protests have caused positive change and gives examples. It also says that ‘god’s kingdom’ offers a better solution but offers no examples or proof of this. In fact it states ‘humans cannot bring about justice and equality’. Which is pretty gloomy. Their god has also done a poor job of it. They suggest ‘many have developed confidence in gods rulership’ but I can feel no such confidence. So far a pretty poor job. It has been left to us humans the whole time. Where’s this deity when you need a bit of social justice?

After this there is an example of someone who used to have fairly normal beliefs but now believes ‘a time will come when there will be no injustice on this planet, when all humans are truly equal.’ A comforting thought for the future whenever that is, maybe never, but what about the present? How long do we have until ‘Jehovah God’ will finally show ‘his’ (or her) hand after all these millennia of inactivity and finally sort it all out for us?

Now we have a breathing space in the form of a scientific article about the sand cat. Interesting and there is a lovely photo. It looks like a close relative of the house cat.

Now here’s the heavy stuff. God’s Kingdom. With the subtitle ‘Is God’s Kingdom a condition of the heart?’. I tend to think it’s an imagination of the brain if it’s to do with any particular organ. Then there is a bit about some saying that God’s Kingdom in in your heart but that ‘The Kingdom’ is a real government. From my point of view both of those seem to be fantasy. Taken literally one means that ‘God’ has a microscopic kingdom somewhere physically in the meat of my heart that doesn’t stop it working as a heart. OK so that one is supposed to be a metaphor. The thing about a real government makes even less sense. Where are it’s houses of parliament? Right, in ‘heaven’ I suppose. Which is where exactly? Not one religious person has been able to tell me where this ‘Heaven’ actually is. I suppose it ‘moves in mysterious ways’.

Then there is a big chunk of text full of bible quotes that really fails to hang together as any sort of logic. At the end of that it says that if I do what ‘God’ asks of me then I can become a subject of ‘God’s Kingdom’. Well ‘God’ has never said a single thing to me, so that would seem impossible. I’ve been listening as I want to know why ‘God’ allowed so much genocide in the name of religion.

About 20 years ago I was called on by a Jehova’s Witness. I asked if he could explain all the suffering in the world and why his ‘God’ seems to have done nothing about all that. Which seems at best idle or ineffectual or an extreme failure to exist. At worst a cruel or uncaring omnipotent being unworthy of our love. He could only offer ‘God moves in mysterious ways.’ which explains nothing. ‘Jehovah’ is teaching us a lesson for Adam and Eve allowing Satan to question his right to rule. Satan has been allowed to rule the earth since then. Let that be a lesson to us. Apparently we should never question anything or the whole planet will be punished for it. For millennia. Bit harsh eh? Seems a poor way to run a world to me.

Then there is a part about ‘Will human efforts bring God’s Kingdom?’ and apparently what we do makes no difference. It’s all up to ‘God’ to set it all up according to this pamphlet. So it makes no difference if I believe in ‘God’ or not. OK I prefer not to believe. I prefer to try and make my own life better and that of my fellow humans, whatever they believe. None of this ‘Kingdom’. I choose not to be a subject. I’m already a subject of the Kingdom of Great Britain and that is enough. 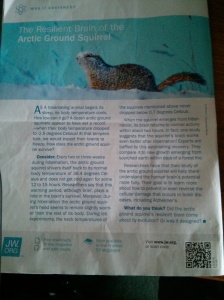 The back cover has some more science about the arctic ground squirrel species. The squirrel would seem to be able to survive hibernating when it’s brain will fall below freezing temperature. Which is remarkable and quite interesting. At the end it asks: ‘What do  you think? Did the arctic ground squirrel’s resilient brain come about by evolution?’ Yes. Of course it of course did. The scientists that did the research on the creature I’m sure all believe in evolution. Survival of the fittest meant that squirrels that can survive freezing were more likely to breed and over many years these very special creatures evolved. ‘Or was it designed?’ No. Just no. Because… science! There is no proof for ‘intelligent design’.

If I was a powerful being, that had created the universe and individually designed what could be as many 30 million species on Earth, would I be letting so many go extinct? I don’t think so. Global warming may well mean the end of this special little squirrel in the wild. I’m guessing here. Would a designer just let that happen? It is happening. If I can create a world then I can make my perfect garden immune the efforts of man to destroy it. Yet we do destroy eco-systems and no lightning from heaven strikes us down for doing it.

For JW, apparently ‘Jesus told his followers to “make disciples of people of all the nations. (Matthew 28:19, 20) When he sent out his early disciples, Jesus directed them to go to the homes of the people. (Matthew 10:7, 11-13)’. So they have to visit people and offer them religion because Jesus told them to all those centuries ago.

Thank you for coming to my home with a smile and offering the gift of faith, but I can’t take it. I don’t believe but if you do and it makes you happy that’s fine by me. Peace and loving care to all on earth.

QUENCHED: What Everyone (Especially Christians) Should Know About Hell

← Short Story: An Observer
My Cousin the Artist →

4 thoughts on “Awake Magazine by Jehovah’s Witnesses: An Agnostic’s Review”