I know I Can Turn This Around

I needed several sources of inspiration to make a post today!

Daily Prompt: Can’t Drive 55
“Take the third line of the last song you heard, make it your post title, and write for a maximum of 15 minutes.” 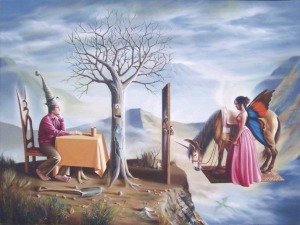 The pale, raven haired girl flew high, rising as if on the air itself alongside her horned, horse-like companion. The creature stood impassively, impossibly held aloft by a small rug, completely unlike a horse. Any horse would have long since bolted.

“What are you doing up here Marto? Me and Unicorno have been looking everywhere. I even grew these wings and flew with the fairies to see if they knew.”

“The tall hat of forgetting is helping me. I came to Impossible Mountain to forget you.”

He removed the pointed hat. It seemed almost alive, but of course hats are never alive.

“We never would have known you were here if carpet hadn’t told us he flew you up here before you sent him away.”

“I do want to see you of course but it hurts. My heart is heavy.”

“Don’t be. I told father if I can’t marry you then I don’t want to be his daughter.”

“You did? I thought you would never defy him!”

“He said if we really love each other them he can’t keep us apart and I do love you so much.”

“The hat said there was a good reason it couldn’t let me forget. Now I know why.”

They flew into each others arms. Literally. In the way that people don’t. Because people can’t fly.

The four of them flew down from the mountain in a swirl of ecstatic happiness.

The End. In exactly the way these stories don’t end.

← The Insect and the Man.
Weekly Photo Challenge: Sea →

3 thoughts on “I know I Can Turn This Around”